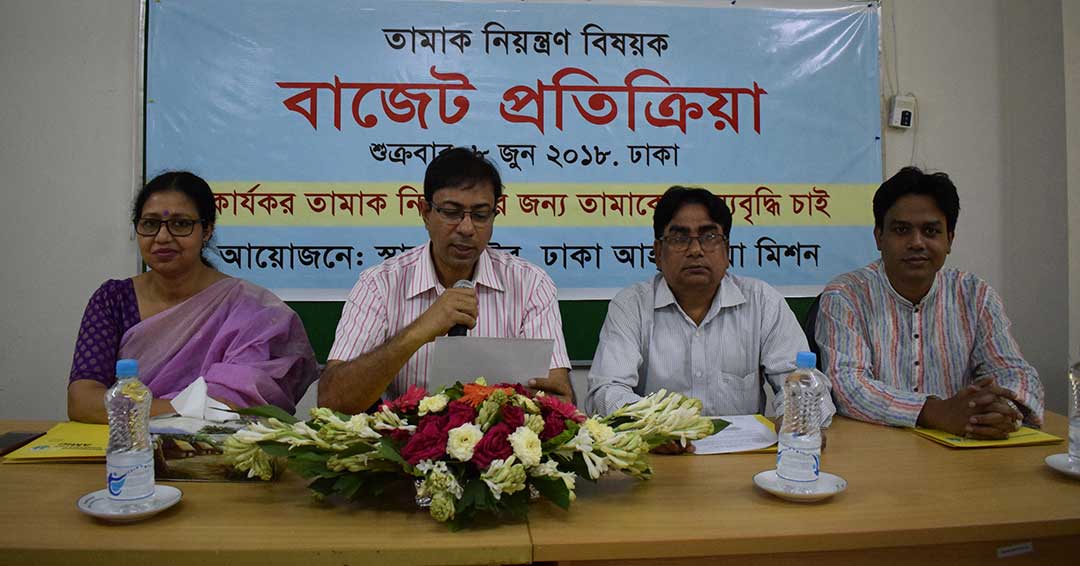 Bangladesh is one of the leading tobacco use country in the world. The prevalence of tobacco related non- communicable diseases is increasing day by day here. Treatment expenditure regarding tobacco related disease is a great burden in the health system of Bangladesh. Effectiveness of proposed budget of this year for controlling tobacco issue is much questionable. To see the proposed budget, it seems that there is a great influence of tobacco industry and tobacco traders in preparing the budget to see the proposed budget. Especially the price of Bidi is remained unchanged. From the experience of tobacco control movement we can say that, Government should come out from the trap of tobacco industry for taking effective step to tobacco control.

This budget will create an immense opportunity to expand the business of foreign tobacco company as the costly cigarette price and supplementary duty has remained unchanged (65%). Tobacco tax has been fixed without keeping the comparison of per capita income which really will not create any effect on tobacco use.

From last few years the tobacco control organizations and activists raised demand vigorously for imposing high tax on bidi for reducing it’s use significantly. Government High Level Officials, budget affairs respective decision makers and honorable Finance Minister also gave their strong and positive commitment for imposing high tax on bidi before budget session. Even honorable Finance Minister also said that Bidi Company will close considering the public health.But there is no reflection in the proposed budget. To encourage the export of tobacco products, the proposed budget has withdrawn the 25 percent export duty on processed tobacco. The tobacco control organization seems that this initiative is also against the public health.

In a study conducted by World Health Organization in 2014 shown that Bangladesh is one among the three countries where  cigarettes are cheapest. In the closing ceremony of “South Asian Speakers Summit” held on 30-31 January’ 2016” at Dhaka the Honorable Prime Minister has declared in her speech that Bangladesh will tobacco-free by 2040. The Honorable Prime Minister also stressed to formulate an easy and effective tax structure instead of present tax structure so that the tobacco use will reduce beside increase the revenue.  Considering the all above it can be say that this budget will not play any role to implement the Honorable Prime Minister’s commitment to build a tobacco-free country by 2040. So as an anti- tobacco as well as development organization Dhaka Ahsania Mission has expressed it’s humble request to honorable Prime Ministers and all MPs to amend the proposed budget regarding tobacco tax before pass in the National Parliament.