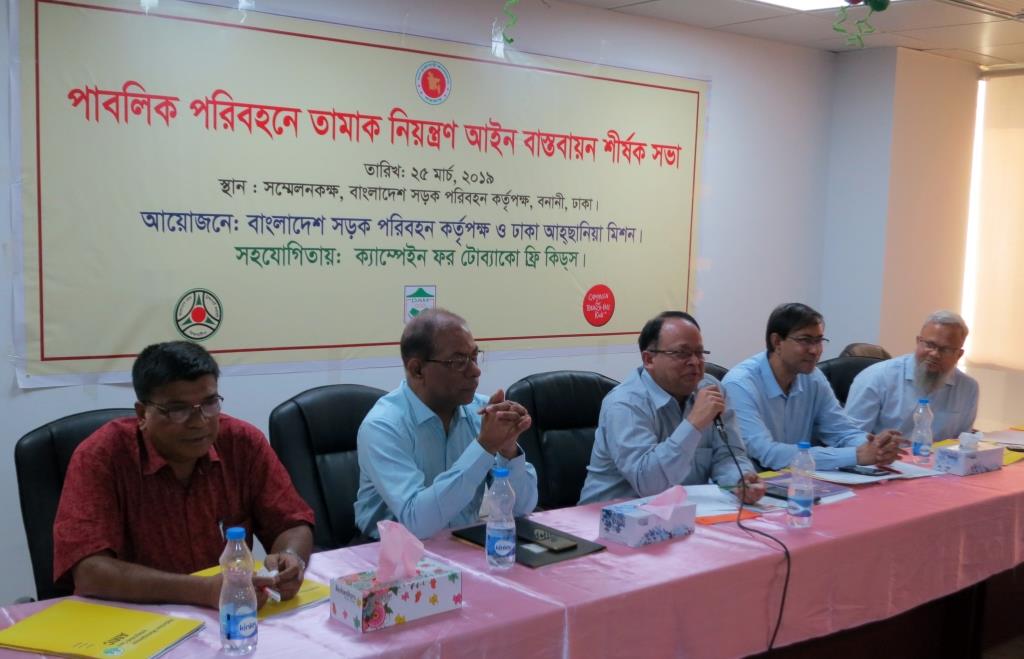 A meeting was held in the conference room of BRTA’s headquarters on March 25, 019, at 11.30 am on Monday, organized by the Bangladesh Road Transport Authority (BRTA) and Dhaka Ahsania Mission (DAM) for the implementation of the tobacco control law in public transport. BRTA Chairman (Additional Secretary) Md. Moshiar Rahman said as the chief guest of the meeting, under the tobacco control law regular mobile court will be run on road transport. He also said that before the next two months notice order will be circulated to show smoke-free signage in all road transports. The meeting was presided over by the Director (Training) Md. Sirajul Islam, among others guests, former Additional Secretary of Health and Family Welfare Mohammad Ruhul Kuddus, Grand’s Manager of Campaign for Tobacco-Free Kids Abdus Salam Miah and Dhaka Ahsania Mission’s Health Sector Head Iqbal Masud. DAM’s Director and Project Coordinator Md. Mukhlesur Rahman presented the keynote paper.
Framework Convention on Tobacco Control (FCTC) agreement was approved in 2003 to reduce tobacco use in a global way. Bangladesh is the first signatory country of this agreement and in its continuation; Bangladesh formulated the Smoking and Tobacco Products (control) Act in 2005 and subsequently amended the law in 2013. Under the amended law, the penalty for smoking in public place and transport has been increased from 50 taka to 300 taka. Even if the public place and transport owner/managers cannot keep their public place and transportation smoke-free for the non-smoker, then they have been fined 500 taka. Despite the ban on public transport in accordance with the law, according to the Global Adult Tobacco Survey (GATS) 2017, operated by the government of Bangladesh, twenty-five million people (44%) adults are subjected to passive smoking during the public transportation. One of the reasons is less awareness about the law, the widespread of tobacco products, the availability of tobacco products, and less enforcement of tobacco control law. Noted that the Prime Minister of Bangladesh Government declared that Bangladesh will be tobacco-free by 2040.