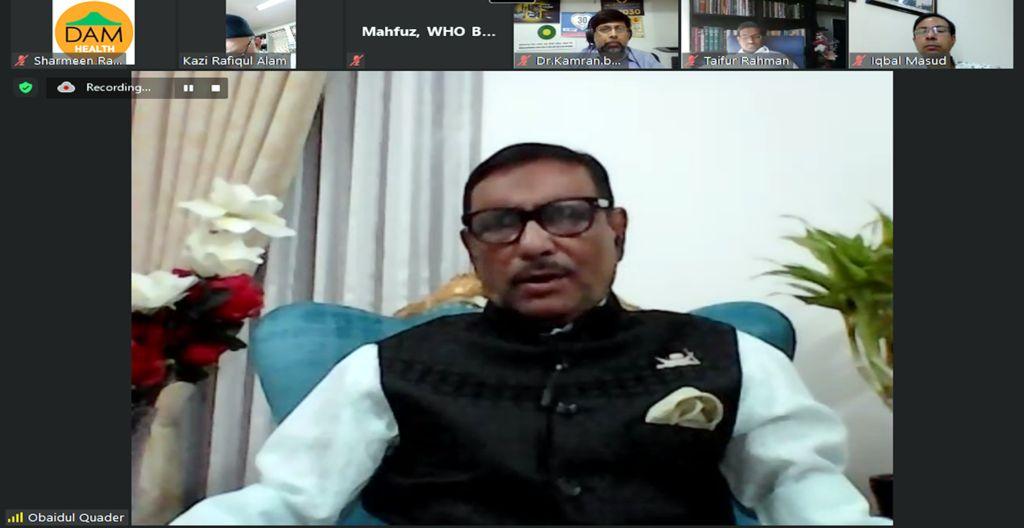 Speaking as the chief guest at a live discussion titled “Roads and Safe Life” on the occasion of UN Global Road Safety Week-2021 from 11 am on Sunday, May 23, 2021, Road Transport and Bridges Minister Obaidul Quader MP said, “The government has taken initiative to amend the Road Transport Act again. Goals no. 3.6 and 11.2 of the UN Sustainable Development Goals 2030 plans to halve the death and injury rates by 2030, respectively, and ensure a safe, secure, accessible and sustainable life for all. Prime Minister Sheikh Hasina has declared solidarity in this initiative.”
He added, “During the tenure of the present government, there has been an unprecedented development in the road and communication system. Mega projects like Padma Bridge, Metro Rail in the capital, Sheikh Mujibur Rahman Karnafuli Tunnel, 22 flyovers have been constructed in Dhaka and outside Dhaka. Roads in several districts and the capital have been widened to reduce accidents. He said that co-operation and co-operation was needed to ensure safety in road transport.”
“Ensuring seatbelts for drivers as well as passengers to reduce road accidents,” said the former Health Minister Prof. Dr. AFM Ruhal Haque MP, Chairman of the Parliamentary Standing Committee on the Ministry of Science and Technology spoke as a special guest under the direction of Mr. Iqbal Masood, Director, Health and Wash Sector, Dhaka Ahsania Mission. He added, “it is also important to make necessary amendments to the law and its proper implementation.”
Taifur Rahman, President, Global Road Safety Grants Program, Geneva, also delivered the keynote address and said, “Amendments need to include speed limits for vehicles, making it mandatory for everyone, including seatbelt drivers, ensuring quality helmets, ensuring safe seats for children,”
The National Professional Officer of the World Health Organization-Dr. Syed Mahfuzul Haque, Global Health Advocacy Incubator Bangladesh Country Co-ordinator-Shariful Alam, BUET Action Research Institute Assistant- Professor Kazi. Shaifun Newaz, and BRAC’s Road Safety Program Head- Dr. Kamran ul Baset took part in this program.
It is to be noted that UN Global Road Safety Week-2021 is being celebrated for the 6th time worldwide. The Health Sector of Dhaka Ahsania Mission organized various programs throughout the week under the slogan “Roads for Life” at the UN Road Safety Week (May 17-23).
This year, the United Nations has called for a maximum speed of 30 kilometers per hour in large cities and pedestrian-dominated areas. Based on surveys conducted in more than 70 major cities, the United Nations has concluded that raising the maximum speed limit to 30 kilometers could significantly reduce the risk of road accidents. It has also been found that traffic and air pollution are reduced. The study found that a top speed of 30 kilometers per hour reduced road accidents by 25 percent in Tanzania, 42 percent in England and 63 percent in Bristol. A study by the World Health Organization found that increasing the speed limit by 1 km increases the risk of road accidents by 3 percent.
Around 1.3 million people die in road accidents every year in the world. Similarly, many people are dying in road accidents in Bangladesh every year. Statistics show that 15,000 small- and large-scale road accidents happen in Bangladesh every year. According to the Road Transport Authority or BRTA, about 30 people die in road accidents every day.
Building safe and travel-friendly roads is a priority of the government. According to the SDGs, the legal framework has been strengthened and the “Road Transport Act 2018” has been enacted by the government to achieve the target of reducing road accidents by 50 per cent and for the second time the ‘Decade of Action for Road Safety’ declared by the United Nations. Later, the Road Transport Act was declared effective from November 1, 2019.
A three-member committee comprising the law minister, home minister and railway minister was formed to make recommendations on how the law could be implemented. Road audit has been introduced in Bangladesh to ensure safe roads like in the developed world. The government has taken steps to amend the law before it is fully implemented. Besides, for skilled and trained drivers, along with BRTA, and other governmental organizations, different nongovernmental organizations are providing skill development trainings as well. Along with this government is taking different initiatives for mass awareness.