On 10 March Dhaka Ahsania Mission (DAM) organized a day long Pictorial Warning Exhibition program on packets of tobacco products was held in front of National Museum at Shahbag in the capital with a call for raising awareness on implementation of the Smoking and Tobacco Products Usage (Control) Act 2005.

The Act, which asked all concerned to use pictorial health warning messages on packets of all tobacco products, is to take effect from March 19. 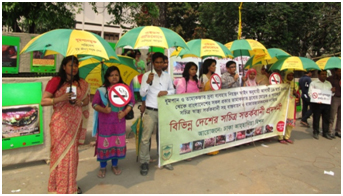 The function was told that Bangladesh is among the top 10 countries of the world, which use tobacco products because of causes such as over population, lower income level among people and poverty. About 57,000 people die and 382,000 others get maimed due to tobacco use and smoking annually in the country.

The Bangladesh government has to spend a huge amount of money for diseases caused by tobacco use and smoking every year in the country. Raising awareness on the issue may play a significant role in reducing the risk.