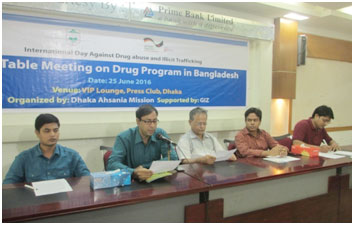 Speakers at a programme here today (Saturday) called for taking up necessary steps for prevention of drug use as it has emerged as a serious threat in the developing countries, including Bangladesh. Earlier, the problem used to prevail among male, now it has spread among female and children in our country as an alarming proportion. It is urgently needed to combat the situation, they said addressing roundtable meeting with journalists at National Press Club today. The meeting was organized by Dhaka Ahsania Mission (DAM) ahead of International Day Against Drug Abuse and Illicit Trafficking to be observed across the world on June 26. Deputy Director and chief of health division of DAM Iqbal Masud presented the keynote paper at round table meeting. Among the female drug users, 43 percent are hooked up with yaba. Through the study, 37 percent have taken drugs due to the family unrest while 33 percent are influenced by friends. Moreover, 34 percent are receiving treatment for psychiatric illness . About 84 percent female drug users are receiving treatment due to pressure by their families, said Mr. Masud in his presentation. In a survey, it was found that 29 percent of the female drug users had pre-marital sexual experience and 23 percent had more than one sexual partners. The survey was carried out on 103 female drug users who came to the centre for treatment and rehabilitation which is run by DAM. Citing another survey on 263 male drug users, who came to DAM for treatment, Mr. Masud said that 40 percent drug users told that they sometimes took alcohol. Among the respondents, 25 were Phensidyl users, Ganja 38 percent, yaba 41 percent, heroin 7 percent and 5 percent used drugs through injection. It indicated that the use of yaba is rising while heroin is reducing. The drug users who are receiving treatment; 25 percent of their family members are addicted to drugs earlier, which means they were introduced with drug from the family and while there were no good parenting. The salient feature of the survey is that self-interest instead of motivation by friends was the most important factor, which led to the drug use. Thirty five percent patients were arrested due to drug offending cases. Of the 263 patients who came for treatment, 73 percent are