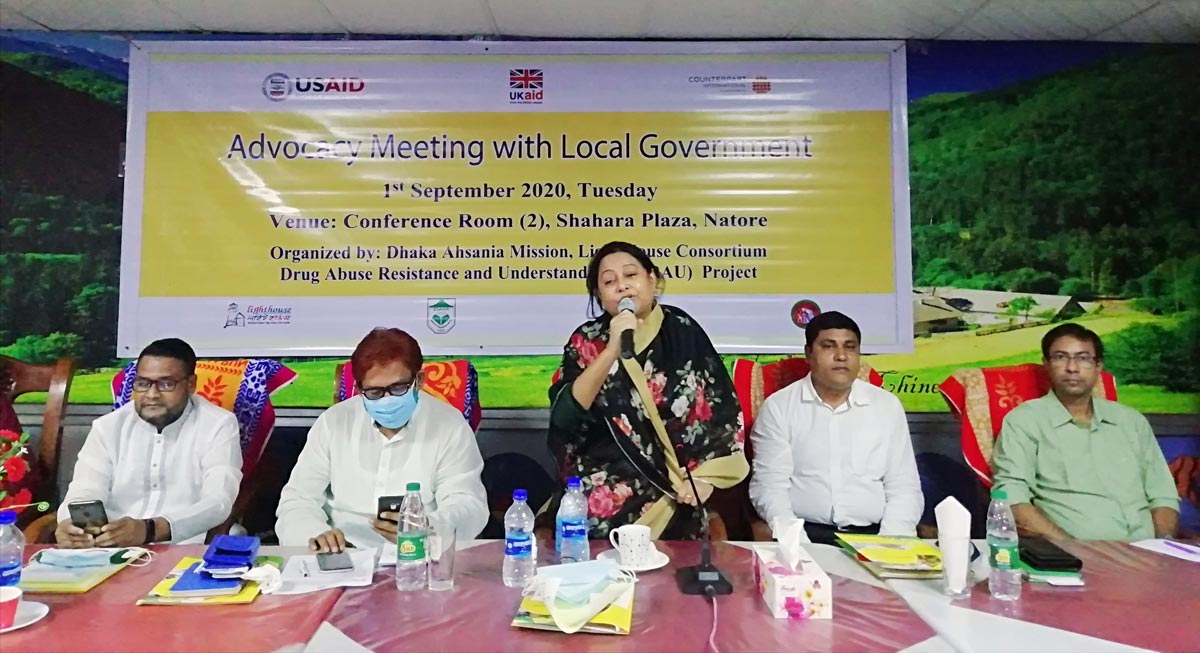 Dhaka Ahsania Mission and Light House consortium organized advocacy meeting with Local Government on 1ST September 2020, Tuesday at Natore district under Drug Abuse Resistance and Understanding (DARAU) project. The project is being implemented at the field level in Rajshahi and Natore district’s technical assistance by Counterpart International with financial support from USAID and UKAID. The advocacy meeting was chaired by Iqbal Masud, Director, Health Sector, Dhaka Ahsania Mission. Assistant Director, Department of Narcotics Control, Natore District Md. Alamgir Hossain was present as a special guest. Natore Municipality Mayor Uma Chowdury was present as chief guest. Light House Executive Chief Md. Harun-ur-Rashid gave the welcome address at the meeting. Afterwards, the keynote address of the meeting was presented by Md. Monowar Hossain, Project Manager of DARAU Project. From partner organization representative Mrs Raushan Ara, Executive Director, NSKS was also present and gave a speech. DARAU Project Advocacy Officer Umme Jannat has moderated the meeting. The meeting was held at conference room of Sahara Plaza. Natore Municipality different Upazila Chairmen, Counselor, Member and representatives of Civil Society Organisation (CSO) were participated. In this meeting, is given a speech in the meeting. Naldanga Upazila Parishad Chairman Md. Asaduzzaman, Lalpur Upazila Chairman Md. Ishaq Ali, Baraigram Upazila Chairman Dr. Md. Siddiqur Rahman Patwari and Prof. Subidh Kumar Maitra Eyara also participated in the open discussion.
The speakers at the meeting said that anti-drug awareness programs should be organized at the grassroots level in Natore. In this case, everyone should pay much attention in organizing awareness meetings in the educational institutions. The activities of law enforcement
agencies need to be made more active. The chief guest of the meeting Natore Municipality, Mayor, Uma Chowdury, said in her speech that mass awareness regarding drug abuse among all people of Natore has to be increased. Through that we can participate in the government zero tolerance for drug abuse combat. Natore municipality will work and help on with CSO and other agency to combat the drug in Natore.
Chair of the meeting, Iqbal Masud, in his speech, said that the local government of Natore can play a very important role in preventing drug problem and the civil society should also be helped in this regard. It is not possible to prevent drug abuse in Natore without combined efforts.