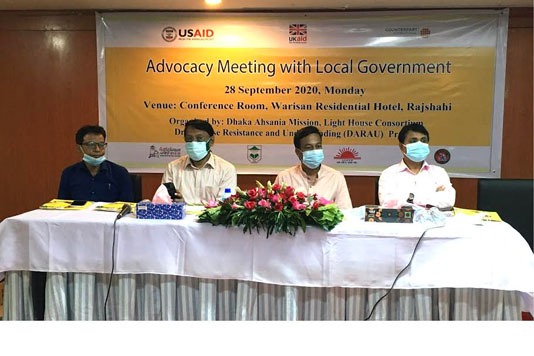 RAJSHAHI, Sept 28, 2020 (BSS) – Concerted efforts of all the government and non-government entities concerned and the community has become crucial to ensure a drug abuse free society to protect the young generation from the devastating impacts of drug-addiction.

Side by side with the public and private bodies, all the local government institutions should come forward and work together to attain the cherished result in this regard as the drug-abusing situation is gradually aggravating.

The observation came at an advocacy meeting with the local government held at Hotel Warisan in Rajshahi city discussing and devising ways and means on how to get rid of the problem.

The four development organizations are implementing the project being implemented in eight wards of Rajshahi City Corporation and all nine upazilas in Rajshahi district and all six upazilas and four municipalities in Natore district aimed at combating drug abuse.

Counterpart International is extending technical support while USAID and UKAID provide financial support to the project.

APOSH Executive Director Abul Bashar welcomed the participants, while Iqbal Masud, Health Division Director of DAM, presented a keynote paper illustrating the aims and objectives of the project along with its implementation strategy.

Quoting the DNC report Iqbal Masud said there are 184 godfathers, 1,100 drug traffickers and 2,000 drug dealers in Rajshahi district. Around 80 percent of the drug addicts are of the 15-30 age groups.

There are also 50,000 drug users like yaba, phensidyl and cannabis in addition to the estimated numbers of 1,569 intravenous drug users in Rajshahi. The meeting was told that more than one lakh people both male and female have come forward and are working together to fight against drug abuse to protect the young generation from its devastating effects in Rajshahi and Natore districts.

To this end, various motivational and awareness programmes are being conducted for their capacity building besides boosting their level of confidence with intervention of the project.

Harun-Or-Rashid told the meeting that cross-sections of people including women, parents, school and out-of-school children, adolescents, youth, transgender, public representatives and members of the civil society are being engaged in the anti-drug abuse campaign.

He said the project is intended to benefit around four lakh people either directly or indirectly.