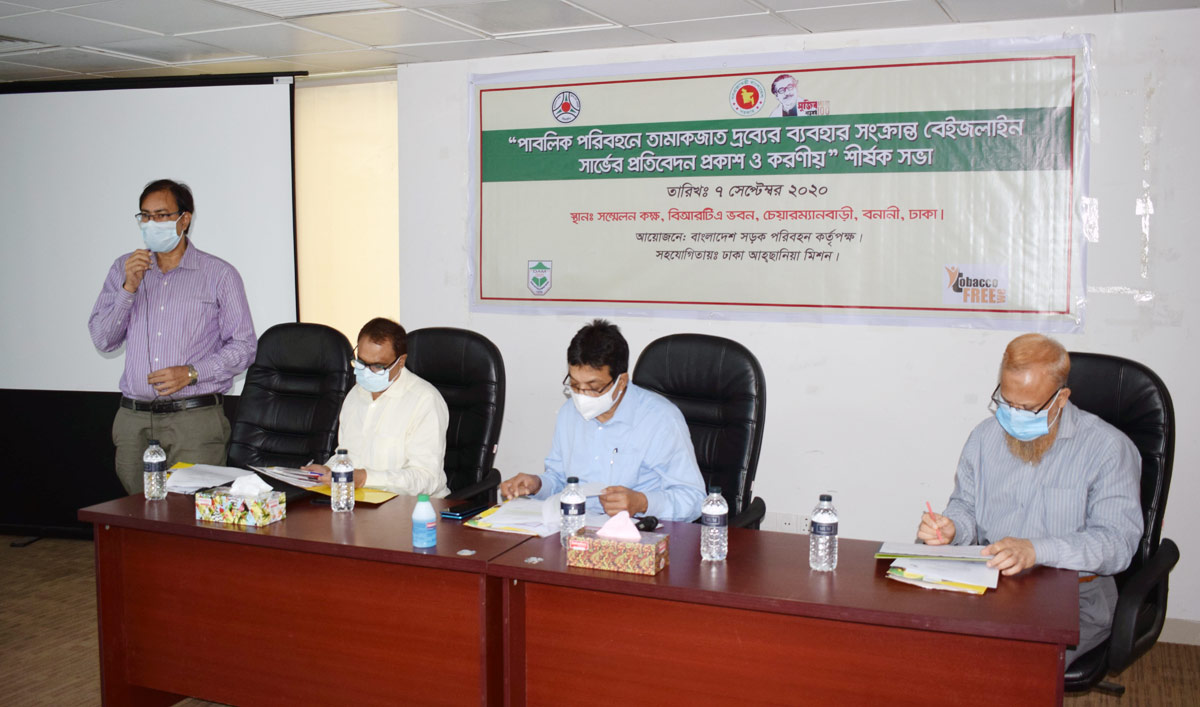 Today (07 September, 2020) at 11:00am, Bangladesh Road Transport Authority (BRTA) has organized a meeting at its conference room, Banani, Dhaka with the support of Dhaka Ahsania Mission (DAM) and Campaign for Tobacco Free Kids (CTFK). The meeting was based on dissemination of the baseline survey findings on compliance of Tobacco Control Law at public transport (bus) in Dhaka City. Director (Training) of BRTA, Md. Sirajul Islam presided over the meeting. The BRTA Chairman and Additional Secretary, Mr. Noor Mohammad Mazumdar was there as chief guest in the meeting. Khondokar Oliur Rahman, Secretary of BRTA was the special guest in the meeting. Assistant Director and Project Coordinator of Tobacco Control Project of Health Sector, DAM Md. Mukhlesur Rahman, presented the survey findings whereas Senior Program Officer of Health Sector, DAM Sharmeen Rahman moderated the meeting. The survey findings show that 100% buses of Dhaka City did not comply with Tobacco Control Law.
The cross-sectional survey was carried out on 22 routes in Dhaka City and 417 non-air-conditioned public buses (city service buses) were observed and each bus was observed once on the month of October in 2019 in the capital. 91.3% buses drivers/helpers were seen to directly smoke in the buses during the survey. Almost 100% buses were found not displaying ‘no smoking signage’ in the buses. Almost 9 out of 10 public buses in Dhaka city were found with smoking instance(s). However, the survey result has a wider gap with the law as according to section-4 of Bangladesh Tobacco Control Law it is prohibited to smoke in public places and public transport.
Director of Health and WASH Sector, Dhaka Ahsania Mission, Iqbal Masud said, “Cigarette does not only harm the smokers but it can cause harm through second hand smoking. As a matter of fact, one person is smoking and the people around that person are being badly affected. Since 1990 DAM has been working relentlessly regarding tobacco control programs besides its other humanitarian works.”
Advocate and Vice-President of Bangladesh Road Transport Owners Association Mahbubur Rahman has requested to BRTA not to provide driving license and fitness certificate without ensuring the ‘no smoking signage’ in the buses. Then all buses will be bound to display no smoking and it will help to keep buses smoke free. On the other hand, Mr. Abdul Kalam, President of Sayebad Bus Owner Association said, “If drivers/helpers do not smoke then they can ensure that passengers also do not smoke. Moreover, no smoking signage can be kept at all the counters so that we can build a tobacco free society”.
Campaign for Tobacco-Free Kids Lead Consultant, Dr. Shariful Islam said, “Bus Owners Association and Transport Labor Union/Association can motivate the bus drivers/helpers and in this way, we can also ensure protection of public health at the same time.” He also mentioned that a clause should be included in the driving license about no smoking in the public transport during managing/controlling the transport as per law.
The Chairman of BRTA and Additional Secretary Mr. Noor Mohammad Mazumder said, “Permanent no smoking signage will be used during providing fitness certificate by BRTA. He believed that 90% of the professional drivers can be made aware through different kinds of awareness programs and the rest 10% of the professional drivers would have to be bound to abide by the tobacco control law through proper implementation of the law”. He also hoped that if BRTA and all association, enforcement agencies (police), drivers and labors will work together and actively follow the law then it is possible to achieve the honorable Prime Minister’s declaration “Making Tobacco Free Bangladesh by 2040” before targeted time.
Among others, were present Grants Manager, Campaign for Tobacco-Free Kids Bangladesh, Abdus Salam Miah, Program Officer (Advocacy & Research), Campaign for Tobacco-Free Kids Bangladesh, Ataur Rahman Masud, Assistant Police Commissioner, Traffic, Gulshan Branch, Newton Das and Chief Executive Officer of Savar Municipality, Sharf Uddin Ahmed Chowdhury, Respective Directors and Magistrates of Bangladesh Road Transport Authority and representatives from different non-governmental organisations.
All of the participants agreed that smoking in public transport is a great threat to the health of all the passengers in public transport (bus) and proper implementation of the law can be a gateway to control smoking in public transport (bus). They recommended that BRTA should regularly conduct mobile court concerning tobacco control law and incorporate the smoking related law in their BRTA Transport law.